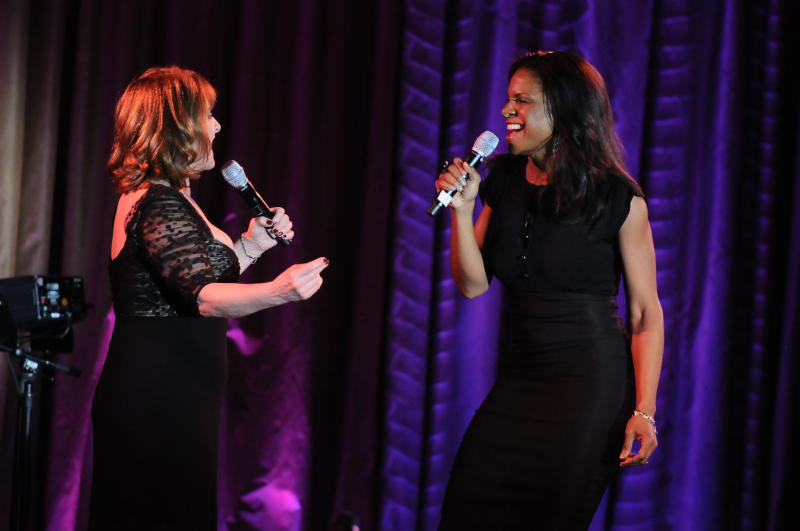 Is there anything more powerful than a musical theater duet for two women? The emotion, the power, the breathtaking bits of unison singing — done correctly, it can leave an audience breathless.

For this list of female musical theater duets, we focused purely on songs that work in a concert or cabaret setting. After all, there are plenty of lovely musical theater duets for women out there — but many lose their impact outside of the show. Take “A Boy Like That”/”I Have A Love” from West Side Story — so powerful in the musical, but in a concert setting? That’s a lot to ask of an audience that isn’t invested in the characters.

We’ve also included links to sheet music for each of these songs. They’re affiliate links, which means that if you click on them and buy the music, we get a small commission to keep Theater Love going. Thanks for supporting us!

Top image courtesy of The Drama League under CC BY 2.0

This beautiful piece, from The Beautiful Game, perfectly illustrates the genius of Andrew Lloyd Webber — impossibly melodic, irresistibly pretty (and yes, pretty predictable, but in the best way), and absolutely lovely for listeners.

It’s fun to sing — the little solo bits give both women a chance to shine, the unison lines are a nice chance to work on your blend, and the little bursts of harmony are super satisfying. If you’re planning a concert, this one is a great palate cleanser; use it after a song that’s more challenging for listeners.

Sheet music for The Beautiful Game

2. When you want a contemporary female duet: “Flight”

This Craig Carnelia duet is a huge crowd-pleaser. It’s exceptionally well-written, both for the singers and the listener — the harmonies and the accompaniment create a gorgeous flood of sound that washes over the audience, so the words almost don’t matter.

Plus, it’s surprisingly singable for both contemporary and legit voices. And that unison note at the end? So effective. Since none of us are Sutton Foster, this video proves that mere mortals can also handle this duet.

3. For singers with excellent facial expressions: “There’s Always a Woman”

Break out your best facial expressions for “There’s Always a Woman”, a duet that was cut from Stephen Sondheim’s musical Anyone Can Whistle. Sung by two deliciously catty characters, this one is fun for the singers and the audience. As you’d expect from Sondheim, the lyrics are jaded, a little dark, and sure to get a laugh. Our favorite? “She almost looks human – It must be the lighting.”

4. When you want that Golden Age of Broadway sound: “Take Him”

“Take Him” overflows with that gorgeous vintage Broadway sound that’s characteristic of Rodgers and Hart. (Although, contemporary voices can also make it work, as evidenced here.) A classic duet for two females from the musical Pal Joey, this one shows off the individual voices, allows for some cute back-and-forth, and lends itself well to beautiful 40s or 50s-style concert dresses.

5. A song for two women who can bring the drama: “I Still Believe”

As with everything Claude-Michel Schönberg and Alain Boublil touch, “I Still Believe” is irresistible. The lyrics establish the drama right away: “Last night I watched him sleeping / My body pressed to him / And then he started speaking / The name I heard him speak…was Kim.”

This is one of those duets that’s so well-written that it goes straight to listeners’ hearts — even the musical theater purists who think Miss Saigon is a bit too poppy and sentimental. For singers, there’s no need to work for the intensity and emotion of the story — it’s all right there.

Also, how much do we love Lea Salonga in any version of this song?

6. Duet for belters: “You Rule My World (Reprise)”

It’s a little strange to add a reprise to a list of concert duets for women (this one comes from The Full Monty), but this one is fantastic. It’s short, catchy, super easy to listen to — and it has just enough belting to impress a more classically-minded (read: old) audience without irritating them. When you’re planning a concert, this is another great palate cleanser.

Sheet music for The Full Monty

See how it works in a concert setting

“Perfect Strangers” a bit of a unicorn in the post-1980 musical theater era — it’s written for legit singers, and it’s sung by a woman and a woman playing a man. This is worth explaining to the audience in advance to explain lines such as, “Too near to touch you! My dearest Ned, how much you mean to me”. The duet, which is from Rupert Holmes’ The Mystery of Edwin Drood, is a lovely legit piece with fantastic range, particularly for the singer playing Drood. We actually prefer this duet in concert.

Sheet music for The Mystery of Edwin Drood

8. When you need a musical theater duet for women with operatic voices: “That Horrible Woman”

Many female musical theater duets sound slightly off when they’re sung in an operatic tone, but not “That Horrible Woman” from A Gentleman’s Guide to Love and Murder by Robert L. Freedman. It’s written for legit voices, so you can let your full vibrato fly. In terms of story, this one is a little odd on its own — but the strength and intensity of the notes are so effective that it almost doesn’t matter. And for two singers who are also strong actresses, it’s no problem to create context in the moment. Here it is as a pure duet, without the men.

9. A country/folk duet for two women: “We Make a Beautiful Pair”

Surprise your audience with a folksy twist with “We Make a Beautiful Pair,” a charming duet from the musical Shenandoah (music by Gary Geld, lyrics by Peter Udell). It has an Annie Get Your Gun vibe, and it’s not too twangy, so it should sit well with most anti-country listeners. Plus, it’s extremely fun to sing, even for legit or contemporary singers. The musical isn’t performed often, so it’s hard to find on the internet; this video gives some idea of the song in concert (with some strange sound issues).

Sheet music for “We Make a Beautiful Pair” (digital download!)

10. For an adorable older/younger singer pairing: “Two Peas in a Pod”

With its impossibly cute mother/daughter vibe and classic harmonies, “Two Peas in a Pod” from Grey Gardens is an adorable duet for an older and a younger woman. This one is sure to charm the audience, particularly if the signers can commit to the camp — bonus points if you can add in a little dance break! It’s also unexpectedly cute with two younger singers.

Sheet music for “Two Peas in a Pod” (digital download!)

11. “I Could Always Go To You” from Personals

A lovely combination of beautiful harmonies and cute humor, this is one of those female duets that charms audiences in the beginning — and then delivers a fun twist. (Plus, how much do we love the word “bullshit” in the middle of a song?) As a bonus, it doesn’t require much staging.

12. “Marry the Man Today” from Guys and Dolls

Do you have two great actresses who are looking for a song? This is one of those adorable Broadway female duets that are a great opportunity to establish characters. There’s plenty of of opportunity for hilarious facial expressions and fun song staging.

This Broadway song grabs listeners from the beginning with its fast pace and catchy vibe. If you’re looking for something that an audience hasn’t heard before, it’s the perfect choice — it’s rarely done in concert! If your singers have great chemistry, it can be a showstopper.

Want to add a little vintage Broadway charm to your concert lineup? You can never go wrong with the song “Sisters” from White Christmas. It’s one of the most adorable female musical theater duets, and if you like, you can go all out with some retro dresses and dance moves to complete the song. (Skip to 0:50 in the video below.)

15. “Some Things Are Meant to Be” from Little Women

Sometimes, you need a quiet musical moment in the middle of a busy concert. This little duet is perfect for that. It’s small and peaceful, and it won’t take away from the big Broadway songs that come before and after it.

Sheet music for Some Things Are Meant to Be (digital download!)

On the other end of the “two sisters” song spectrum is “The Stepsisters’ Lament”. A fantastic opportunity for humor, it’s the perfect way to lighten a concert lineup that’s packed with theatre ballads. Take it up a notch with simple staging, and let your ridiculous facial expressions fly. (Also, Audra!)

Okay, so it’s not technically a musical theatre duet, but it is one of the songs from Glee, so it’s practically the same thing. When you have two women who can seriously belt it out, this song will steal the show. Bonus? Round up a little band with a brass section.

This one isn’t one of our beloved Broadway, songs either, but it has some serious theatricality that fits right into a musical theatre recital. This song is the perfect way to work two female opera singers into your lineup, and it’s guaranteed to leave listeners smiling.

Need a Broadway duet for two altos? This is one of the best duets from musicals. It’s got a comfortable, low range — and plenty of speak-singing. It’s a song that’s usually performed by older actresses, but any two women with confidence and sparky chemistry can pull it off.

A little country, a little Broadway, a hint of belting — this duet for two women is an unexpected addition to a musical theater concert. It has some really lovely moments of harmony and unison, and in the hands of the right singers, can be one of the most beautiful mid-show musical duets.

When you’re picking Broadway duets for two women, look for pieces that are:

Sounds obvious, right? You’d think so, but many female duets — particularly in contemporary musical theater — fall short on one or more aspects. (We’re thinking in particular of “Sonya and Natasha” from Natasha, Pierre & The Great Comet of 1812…yikes.)

What other female musical theater duets are you loving right now? 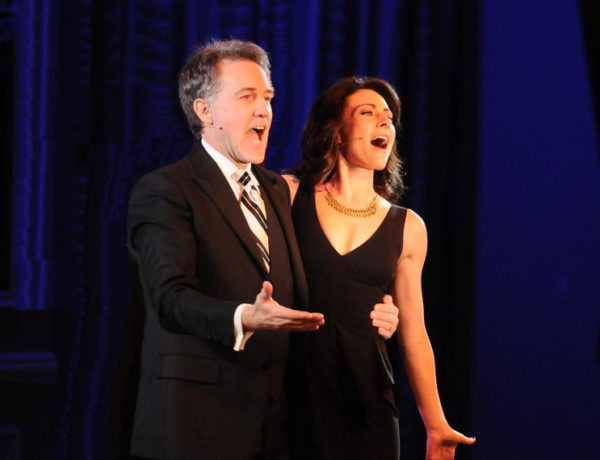 How to Get Involved in Community Theater